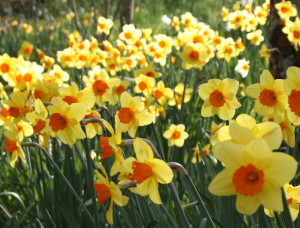 Autumn -‘Season of mists and mellow fruitfulness’ – and time to plan your display of colourful bulbs for spring. These really are the curtain-raisers of the gardening year, and drifted through borders, they will help fill gaps and provide colour and interest before the first herbaceous perennials start to appear.

Among the earliest of the spring bulbs are the beautiful dwarf Iris, Iris reticulata, whose blooms vary from pale blue to deep violet with a central yellow splash, and great mixed with dwarf narcissus varieties such as the golden yellow ‘February Gold’ for plugging those early gaps at the front of the border. Winter aconites (Eranthus hyemalis), crocus and grape hyacinths (Muscari)also add low level impact, whilst taller and later-flowering bulb varieties are invaluable for enhancing the display of spring-flowering shrubs and perennials. From the golden trumpets of daffodils and narcissi, to bold drifts of bright tulips, ranging in colour from the purest white of ‘White Triumphator’ to the purple of ‘Queen of the Night’, and then later on to the architectural displays of Alliums, from the tall, erect stems of ‘Purple Sensation’ to the giant heads of Allium christophii.

You could also consider naturalising bulbs in the garden, using crocuses, daffodils and snowdrops to brighten up lawns, wild flower areas and verges, whilst for areas under deciduous trees where it is often too dry and shady to get much to grow, anemones (e.g. Anemone blanda, Anemone nemorosa), scillas (Scilla biflora, Scilla sibirica), crocuses and hardy cyclamen are ideal.

The best way to achieve that natural look is to throw the bulbs up in the air before planting, and plant them where they land.

The best time to plant bulbs if you want to fill your garden with colour next spring is early autumn, although tulips are best left until November, as this will help to lessen the risk of Tulip fire.