Snowdrops – A prelude to spring 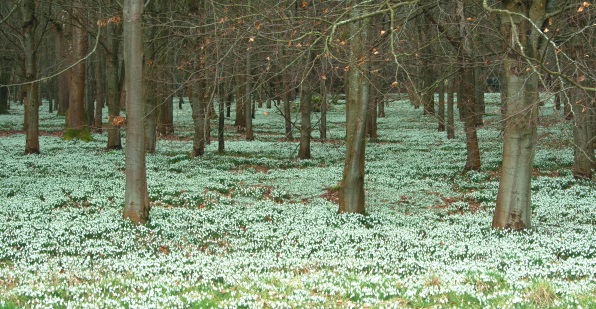 It’s been a stormy, and often time gloomy, start to the year so far, but guaranteed to bring a smile to my face no matter what the weather are the nodding heads of snowdrops that flank the walk up to my office. I started off with just a few small clumps about 10 years ago, but over time these clumps have been divided and spread, so that we now have something more akin to the drifts of them that I’ve always lusted after. The majority are naturalised in the grass under the fruit trees, but there are a few clumps at the front of the borders closest to the house, providing a touch of cheer through the window for days when you don’t actually want to venture outside!

Most are mine are the familiar snowdrop of our woods and gardens, Galanthus nivalis – not actually a native snowdrop species.  They were thought to have been introduced to our shores sometime in the 17th century, but has clearly adapted well, being easy to grow, resilient and hardy. 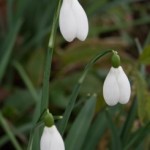 I’ve got both single and double-flowered varieties in my garden, but the singles are best for bees as, unlike the double varieties, they act as an early source of pollen/nectar.

There are many varieties of snowdrop to choose from, and really obsessive collectors have been known to pay hundreds of pounds for bulbs of the rarest varieties (a single bulb of Galanthus ‘Elizabeth Harrison’ fetched £725 at auction in 2012!), but for the average enthusiast (officially known as a Galanathophile), there are plenty of more affordable varieties to start with, and here are just a few: 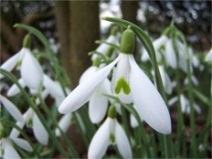 The best way to establish snowdrops is plant freshly lifted ones in late spring, just as the foliage is beginning to die back. Alternatively, buying them ‘in the green’ (i.e. just after flowering when the leaves are still green) is the next best thing.

Just split a group into bundles of 4 or 5 bulbs and redistribute around your garden as required.